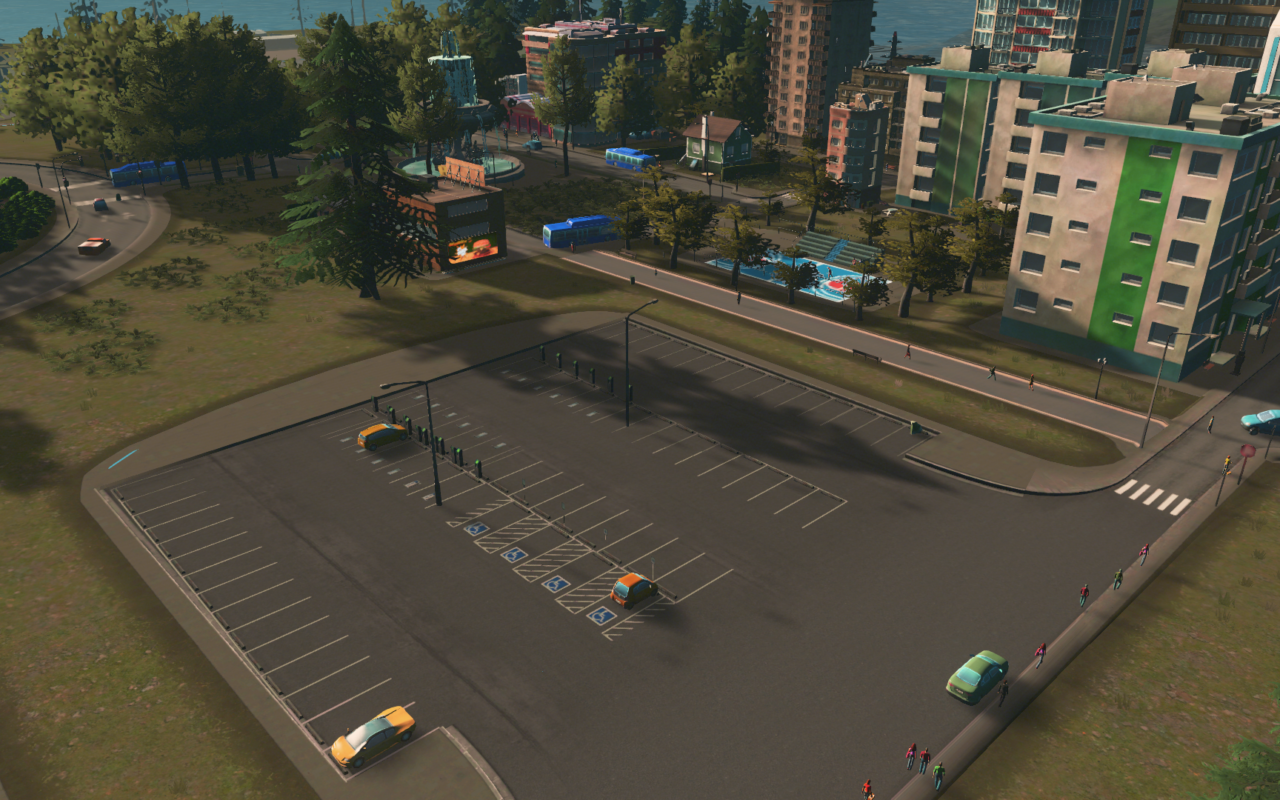 Energetic Elecville – the city that never sleeps. That’s our slogan, no other city uses it, and don’t let them tell you otherwise. They’re wrong.

As I really enjoy Cities: Skylines (read: I can’t resist touching our stream city), I will sometimes tinker on our city off-stream. This post details all the changes made to Elecville since part 1 was streamed on Twitch, with many screenshots inside!

Industry has been moved

The highway connection continues on to downtown Elecville. This allows the downtown area to have a second connection to the highway system, as well as directly connect to the industry area by road.

The layout follows an oval-a-bout (hello Biffa!) layout in the core, with parks, services and a metro line (more on that later) starting point in the center. The industry buildings are placed on either side of the oval-a-bout.

Further back, some offices, retail stores, a warehouse for general goods as well as a cargo terminal are placed.

The road crowning our new dam is used to connect our newly created tourism and leisure areas to the road network. Speaking of which…

Two new parts of town have emerged! Just across the water, a leisure area has popped up, allowing tourists and citizens alike to enjoy beverages, go on fishing tours and play some tennis.

This area is also home to a couple thousand cimizens, has both an elementary and a high school and is also connected to downtown via a disabled ferry route. Disabled because of the arrival of our metro system (it’s coming up soon, I swear!) which connects the tourism area to downtown.

While currently consisting of a couple of streets, eventually the tourism sector is envisioned to provide a substantial portion of the Greater Elecville Region’s economy.

As Elecville will be played with vehicle despawning turned off, a vital part of the city will be to have a functioning public transit system. Without it, traffic would grind to a halt.

The city currently features three metro lines, three cargo terminals, two train stations, two bus lines and one cable car route. As a result of efficient use of public transportation, traffic is stable on 84-86% with despawning turned off and minimal use of round-a-bouts.

Check out a some photos of our glorious transport system below!

The start of our oil industry has been made. While still a one star area, oil resources are rumored to be vast, with the ground turning brown from all the rich juicy black stuff just begging to be pumped from underneath it. Or is that the effect of pollution caused by all the drilling?

My Players, I’ve heard you! From this city onward, we will strive to make areas pretty and adding my own personal touch to areas I build.

In the oil town, I’ve prettified the round-a-bout. I’ve also added a custom parking lot – something I will be doing more in areas which see a lot of vehicle traffic.

Areas have been divvied up and area ready for you to claim – or destroy. Either way, be sure to bring your Super Ponies. Let’s have some fun!

Where to find Frits!

Click the image to buy Cities: Skylines.
5% of your purchase amount goes to Frits!